One Cardinal Way Apartment Building in St. Louis Will Have GRECO’s Railings 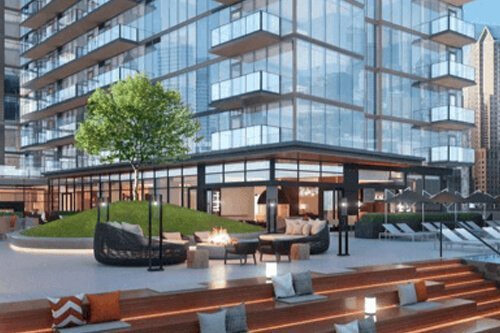 States and Canada, is pleased to announce their participation in phase two of St. Louis’s Ballpark Village expansion project, the development of One Cardinal Way.

The 29-story mixed-use luxury apartment building, designed by Hord Coplan Macht, is part of Ballpark Village – Phase 2 and is being developed in partnership by The Cordish Companies and the St. Louis Cardinals. The building will include 6,738 linear feet of GRECO’s aluminum and glass railings installed by Total Enclosure Solutions, a subsidiary of PARIC Construction, the General Contractor on the project.

“St. Louis is a thriving market. We’re excited to be involved once again, with PARIC on another project in St. Louis. Our engineers and design team did a great job in meeting the project specifications for performance, aesthetics, and staying within budget,” says Jim Ellsworth, President of GRECO’s U.S. Operations.

One Cardinal Way will be located in the heart of Ballpark Village. The tower features views of Busch Stadium, the Gateway Arch, and downtown St. Louis.